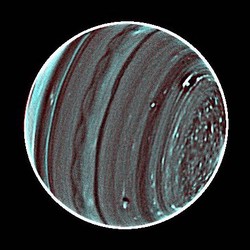 Onwards to the Ice Giants…

The Ice Giants, Uranus and Neptune, are the least explored class of planets in our Solar System, having been visited only once by a passing spacecraft, Voyager 2. These distant Ice Giant Systems may be hiding secrets that could reveal the origins of our Solar System, and are our nearest and best representatives of a type of planet that is commonplace in our universe.

In January 2020, Planetary Scientists from around the world met at London’s prestigious Royal Society for a three-day workshop on the future exploration of the Uranus and Neptune systems. We aimed to shape the key scientific questions that will drive mission planning in the coming decade, aiming to make use of ideal launch opportunities around 2030. You can now download the Full Programme (PDF).

The organisers have prepared a Statement of Meeting Outcomes, capturing the key discussion points of the meeting, and the future strategy for coordination to realise our aims of an ambitious, paradigm-shifting mission to the Ice Giants in the coming decade.

Photographs from the event are being hosted on Flickr, including a group photograph taken on Tuesday 21st January in the Marble Hall of the Royal Society.

The meeting organisers used social media in attempt to generate wider excitement for proposed missions to the Ice Giants. You can view some of the conversations here, and can still get involved via @IcyGiants.

Email updates: for updates, please send an email with the subject “Subscribe” to this address. Your email will only be used for information associated with Ice Giant mission planning and meeting organisation, and you can unsubscribe at any time.

The Ice Giant Systems workshop will be consist of four distinct components:

You can download the Full Programme (PDF). PDF copies of presentations are provided where applicable.

On the evening of Monday 20th January, the first floor of the Golden Lion pub is reserved for students and early career researchers attending the Ice Giant Systems 2020 meeting. Come and enjoy a casual drink at this quaint English pub that is only a 5 minute walk from the Royal Society venue where the first day of talks is taking place. Feel free to join any time between 7pm and 9pm, anyone is welcome. Address: Golden Lion, 25 King St, St. James’s, London SW1Y 6QY

Talks are 15 minutes unless otherwise stated - plan for 12 minutes with 3 minutes of Q&A and handover. Please bring slides to the Session Chair in advance of your session.

Poster boards are set up in the Dining Room during the final session of Day One. They are 2m high and 1m wide, and we are limited to a maximum of 32 posters.

Poster boards will be set up in the Lower Library at the Geological Society during the Splinter workshop, for viewing during lunch.

The formal registration deadline for this meeting was December 10th 2019. However, free registration for the Royal Society two-day plenary sessions (January 20th and 21st 2020) will remain open via this link.

Splinter Registration [Closed]: Registration for the splinter workshops on January 22nd at Burlington House was via a separate process using this link - a £55 fee will be charged to cover the costs of venue hire and catering (refreshments and lunch will be provided). Closing deadline for registration was 23:00 UT on Tuesday December 10th 2019.

Abstract Submission [Closed]: We invited contributed abstracts from the scientific community for both a poster session (Monday 20th, evening) and/or the splinter workshops on Wednesday 22nd. Please download this form and follow the instructions carefully. This allows you to state your preferred presentation (oral or poster), your preferred splinter workshop, provide a 200-word plain text abstract, and (optionally) figures with extended captions and links for further reading. Once complete, please send the completed form to ice-giants@le.ac.uk before 23:00 UT on Tuesday December 10th 2019 (and remember to register for BOTH the plenaries and the splinters).

Details on accommodation and transport during your stay in London.

Instructions for reaching the Royal Society are available here. Information about Burlington House (for the splinter meetings) is available here, and the nearest Underground stations are Green Park and Piccadilly Circus.

London accommodation can be expensive, so you are advised to book early. The following list of hotels provide good value for money, but the organisers take no responsibility for the quality of the accommodation.

Onwards to the Ice Giants